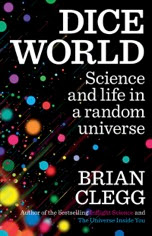 Those of you who have been around the blogosphere with me for a while will know that my original obsession was, and continues to be, science. And one of my favourite science writers is Brian Clegg. I wrote about him most recently here. I’m happy to say, Brian has a new book out called Dice World, and this one is all about chaos and the randomness of the universe. Lest I get it wrong, I asked Brian to ramble on a bit about the book himself. Here’s what he has to say, but even before you read it, I can tell you that if the workings of the world fascinate you at all, you should rush out and buy this book.
In response to the wonderful predictive powers of Newton’s equations, the French mathematician and scientist Pierre-Simon, Marquis de Laplace conjured up a picture of a clockwork universe, where with sufficient knowledge it should be possible to forecast all events for eternity. He wrote: ‘Given for one instant an intelligence which could comprehend all the forces by which nature is animated and the respective situation of the beings who compose it – an intelligence sufficiently vast to submit these data to analysis – it would embrace in the same formula the movements of the greatest bodies of the universe and those of the lightest atom; for it, nothing would be uncertain and the future, as the past, would be present to its eyes.’

At first glance there is something inevitable and rather pleasing in Laplace’s picture. We know that everything is made up of atoms that obey physical laws. If it were indeed possible to capture every single piece of data about every atom, then surely Laplace’s ‘vast intelligence’ could see how everything would change and interact? And yet this picture fell apart with painful rapidity. Although Newton’s laws allowed a perfection prediction of how two bodies in space would interact due to gravity, just one extra body – say adding the Moon to the Earth and the Sun made it impossible to come up with exact predictions. Not just difficult – impossible. Add in the chaotic nature of complex systems like the weather and the discovery that at the level of quantum particles there is no certainty before measurement, just probability, and the clockwork universe was well and truly dismissed.

This doesn’t mean we have to throw up our hands and give up. We may live in a universe where randomness is at the heart of far more than we like to admit, but the tools of probability and statistics give us the methods to at least ride the wave of probability and get some insights into the way things will develop. Entering Dice World may mean doing away with certainty, but there is plenty we can explore and wonder at – which is the theme of my book. But care is required. Randomness is not something we handle well. We understand the world through patterns and we force patterns on the world even where they don’t exist. And that means whenever we use probability we have to be very careful not to fool ourselves.

A good example is the way that randomness can produce apparent telepathy from nowhere. In some telepathy trials carried out in a US university, a random number generator selected a value when a human operator (a research student) pressed a button. Then the operator would attempt to communicate that number by telepathy. If the generator produced the same number twice in a row, the operator often assumed that they hadn’t pressed the button properly and pressed it again. This simple error corrupted the experiment  and made it seem as if people were telepathic even though there was no such evidence from this experiment.

How could this happen? There were ten possible numbers. So if the person being tested for telepathy guessed at random, with no telepathic effect, they should have a 1 in 10 chance of getting the right answer. If they scored better than 1 in 10 over a long series of trials then there must be something happening, perhaps telepathy. But with the operator rejecting a repeated number, there was a 1 in 9 chance of the number that was used being chosen. And because the people making guesses also tend to avoid repeated numbers, they will have a 1 in 9 success rate. And that’s enough better than 1 in 10 that over a large number of trials it could be assumed that telepathy really exists.

Experiments that try to prove or disprove the existence of telepathy and other psi phenomena are bedevilled with errors arising from probability and statistics that can produce an apparently significant result from either failing to use truly random numbers or misinterpreting the results. Randomness is at the heart of reality, but whenever we try to get a handle on it we have to be extremely careful that we don’t allow chaos to prevail. Think about that next time you are presented with statistics in the news. Do the numbers really mean what they seem to say? Welcome to Dice World.